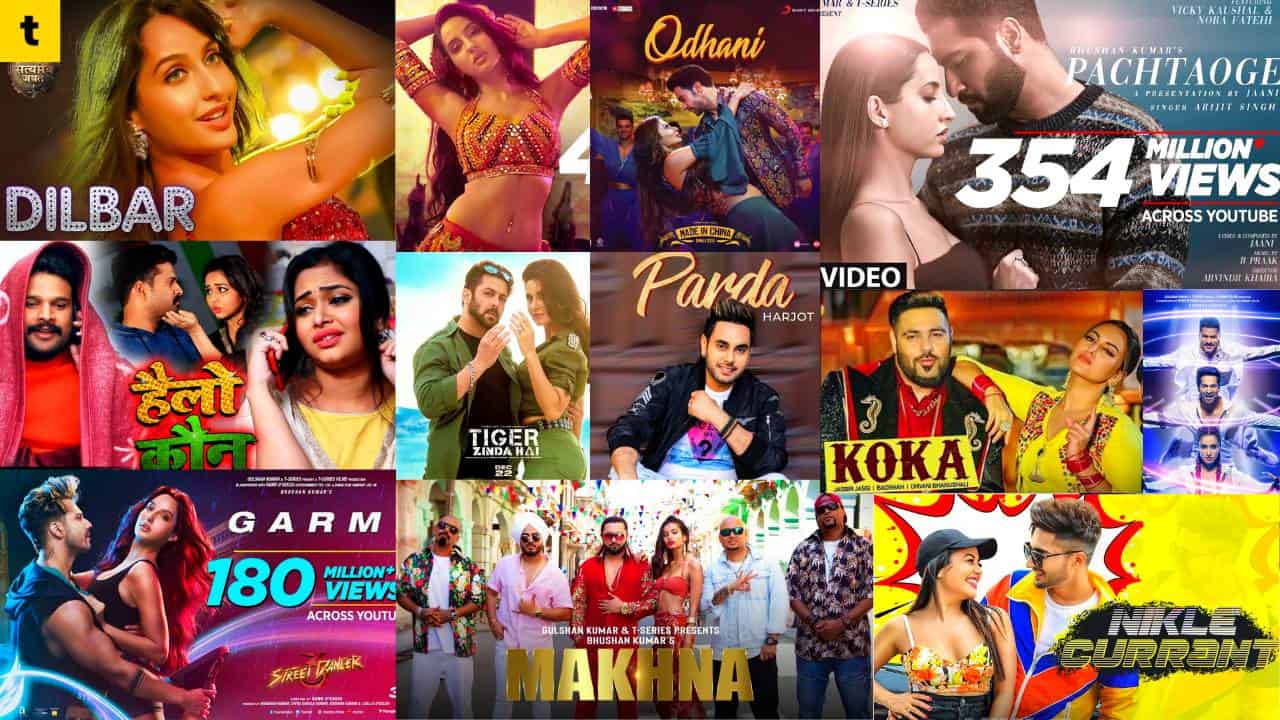 Whatsssup Ladies and Gentlemen welcome to our most interesting listing article provider toplistin.com and in this article, you will know about Top 25 Fastest Indian songs to reach 100 Million views on YouTube. Are you excited to know?

As we know, YouTube is a giant video-sharing platform in the world. YouTube has 2 Billion logged-in monthly users. India comes in the 2nd position after the United States if we talk about the audience.

Indian song is most searched songs over the internet as well as on YouTube. The demand for Indian songs is globally high. And 1 million-plus songs are being uploaded on YouTube monthly. MOREOVER, this is the reason of getting more views on YouTube in less time.

One of the reasons which prove that Indian songs are most demanding and liked by billions of people is that T-series.

As we all are aware that T-series is the most subscribed channel on YouTube. And, 1000+ songs are being uploaded on T-series.

Let’s get straight toward the list without wasting time.

Geet MP3 & GK.DIGITAL presents the Prada song. Which was the Most Waiting Song 2018. It is a Punjabi song. In Featured “Satti Dhillon” & “Swalina”. Prada song is Composed By “Jass Manak” also Written & sung By “Jass Manak”

“Nikle Currant” song was uploaded on the T-series channel, this track is in the voice of “Jassi Gill & Neha Kakkar”, composed by “Sukh-E Muzical Doctorz “ and the lyrics of this new song is penned by “Jaani”.

Do You Know:- Most Viewed Indian Songs in First 24 Hours on YouTube

“Garmi” video song was uploaded on the T-series channel. This song belongs to the Street Dancer 3D movie. This foot-tapping soundtrack is sung by Neha Kakkar, Badshah, composed & penned by Badshah.

This song is an album song that was uploaded on the T-series. After a long break, Yo Yo Honey sing came with this song. Which was liked by many.

A Prestige Diamond and Jewel exhibition in India which the world comes to see gets hit by a twist featuring Yo Yo Honey Singh, Nidhi Sunil, Singhsta along with Pinaki, Sean, Allistair (TDO).

T-series Presented “Har Ghoont Mein Swag” song on YouTube channel. Moreover, featuring Tiger Shroff and Disha Patani. Composed, written and in the voice of Badshah. This song is a kind of promotional video or says an advertisement for the Pepsi company.

Do You Know:- All-Time Top 25 most viewed South Indian songs on YouTube

This song belongs to one of the Salman Khan’s & Katrina Kaif’s action movie Tiger Zinda Hai. This song was uploaded on Yash Raj Film in a short YRF channel.

Do You Know:- Fastest Indian Movies Teaser/Trailer to reach 1 Million likes on YouTube

This song was uploaded on the T-series channel. This song is most iconic which is titled “Muqabla”. In English Muqabla means kind of fight, this song is made for Bollywood movie Street Dancer 3D,

Witness the king of dance, Prabhudeva back with Muqabla in the voice of Yash Narvekar, and Parampara Thakur, penned and composed by Tanishk Bagchi.

This song was also uploaded on the T-series channel. This song is a recreation song of illegal weapon.

Witness the king of dance, Prabhudeva back with Muqabla in the voice of Yash Narvekar, and Parampara Thakur, penned and composed by Tanishk Bagchi.

The hottest dance anthem of the season as “O SAKI SAKI” from the movie Batla House, with the sizzling performance by Nora Fatehi. The song is sung by Tulsi Kumar, Neha Kakkar, B Praak. The track is recreated and written by Tanishk Bagchi. The song is originally composed by Vishal- Shekhar.

Do You Know:- Most Viewed Indian Video in YouTube History

This video song belongs to series titled “YAAD PIYA KI AANE LAGI” featuring Divya Khosla Kumar and Faisu. This is a romantic song is recreated by Tanishk Bagchi, the song is sung by Neha Kakkar, penned by Jaani. The video is directed by Radhika Rao & Vinay.

This song belongs to Sony Music India and it is an advertisement for the “Lays” company which is a chips company. Be This music says the reason for someone’s smile today, Smile Deke Dekho!
The latest track ‘Smile Deke Dekho’ starring Alia Bhatt & Ranbir Kapoor.

This song was uploaded on YRF YouTube Channel. Hrithik Roshan and Tiger Shroff are bringing all shades of celebration to the floor! Team Hrithik & Team Tiger Join in the fun!

It is a Bhojpuri song. This song features Ritesh Pandey, Sneh Upadhya.

Do You Know:- Top 10 Most-liked videos in YouTube history

This album song was uploaded on the T-series channel. “Vaaste” In the voice of ” Dhvani Bhanushali & Nikhil D’Souza”, composed by “Tanishk Bagchi” and the lyrics of this new song are penned by “Arafat Mehmood“. The Video Directed By Radhika Rao & Vinay Sapru.

Pepsi’s single anthem – SWAG SE SOLO featuring Bollywood’s biggest SWAG STAR: Salman Khan. This video is directed by Remo D’Souza. It is an advertisement for the Pepsi company. This video song was uploaded on the T-series company.

PACHTAOGE is a sad song sung by Arijit Singh. The music is by B Praak and composed & written by Jaani. This new love song is Starring Vicky Kaushal & Nora Fatehi and featuring Prabh Uppal from the Album “Jaani Ve”.The video is directed by Arvindr Khaira.

T-Series presented by Bhushan Kumar’s SLOWLY SLOWLY by Guru Randhawa featuring Pitbull. The upbeat peppy number was shot in Miami by Director Gifty which promises to be a visual and aural treat for fans of the two performers.

Good things happen “Slowly Slowly” and this cross-cultural collaboration marks T-Series foray into the international music scene and steps ahead in going global.

T-Series in association with Emmay Entertainment presented the lyrical video ”Dilbar” sung by Neha Kakkar, Dhvani Bhanushali, Ikka. Music given by Tanishk Bagchi and lyrics is penned by Shabbir Ahmed.

Filhal song was uploaded on Desi Melodies YouTube Channel. FILHALL, a feel-good song about love and it’s the beauty of never giving up.

From the makers of iconic songs like Qismat, Maan Bhariya, Pachtaoge, and Coka, one of Bollywood’s most celebrated Artist Akshay Kumar Featuring Nupur Sanon, bring to you, their first-ever debut Music video, in the voice of Bpraak.

The video shot is done by the concept king Arvindr Khaira and penned down by one and only lyrical machine JAANI. Filhaal, a song that depicts the story of that true love which is pious, selfless yet incomplete.

Ladies and gentlemen, List is ended up. When I was listing the song I have noticed that about 90% of songs of this list belong to T-series and were uploaded on T-series. I am sure, You might have noticed that. Right?

There is more song in the future is going to come. I am sure this list is going to change soon. Because every day one by one great Indian songs is coming.

If you have any questions or wanted to share thoughts and then, I love to hear from you. For sharing thoughts, you can fill up the contact us form Or you can email us which you will get in the footer section and we’ll read your comment.