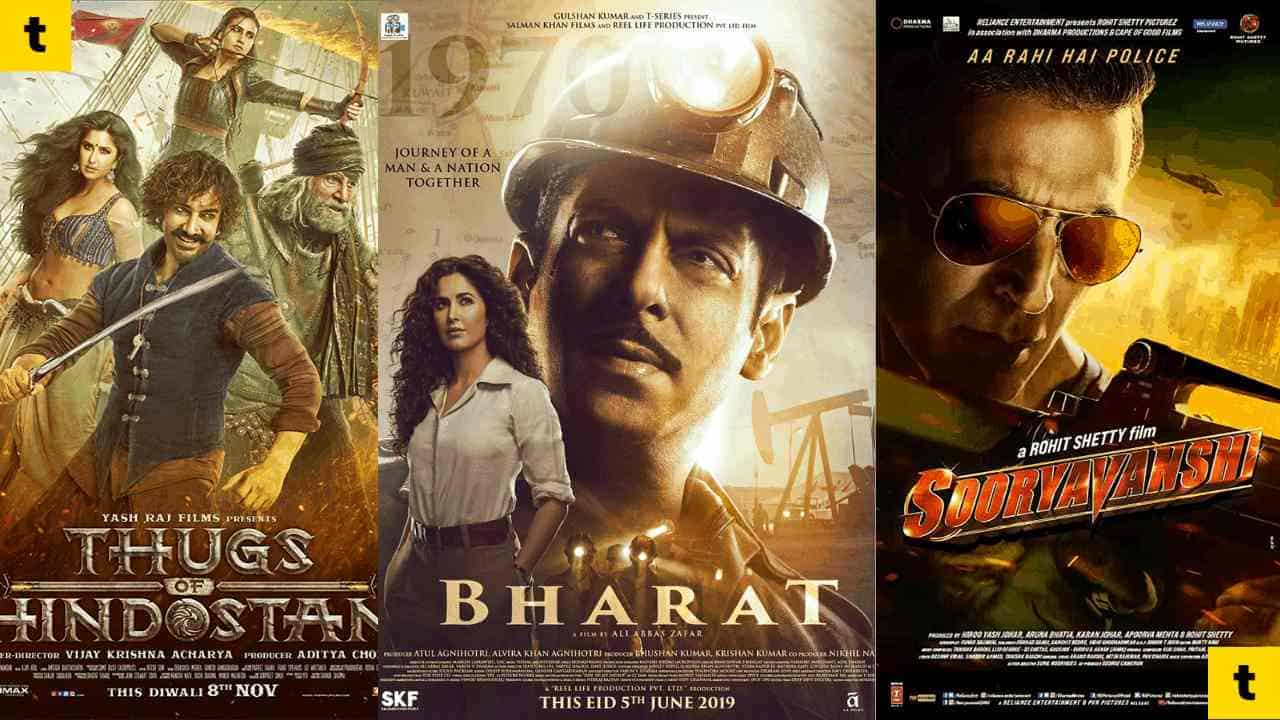 Whatsssup Ladies and Gentlemen welcome to our most interesting listing article provider toplistin.com and in this article, you will know about Fastest Indian Movies Teaser/Trailer to reach 1 Million likes on YouTube. Are you excited?

As we know, Indian movies are very famous around the world. In the film industry after the Hollywood Movies, Especially Bollywood movie is the most recognized movies in the world.

Whenever any movie is about to launch, then before the movie release the teaser or trailer is being released of the movie on YouTube. That’s why in this article, I’ll be listing the top 9 Fastest Indian Movies Teaser/Trailer to reach 1 Million likes on YouTube.

Method of ranking the movies

The movie teaser or trailer, which would have got minium 1 million likes in less time will be listed accordingly. The rundown of the movies will start at 9 and will go to 1. I’ll attach the YouTube trailer too below every movie’s name.

In the end, there will be a table, in which all the data will be simplified. So that you can have the list of Fastest Indian Movies Teaser/Trailer to reach 1 Million likes on YouTube in a quick look.

Let start with 9 without wasting time.

Thugs of Hindustan was one of the most awaited movies for the people. Lead Actor of the movie is Amir Khan. Who is a great Bollywood actor in India. Moreover, Amir Khan is known as Mr. Perfectionist.

This movie created a great hype in India. However, after the release of this movie, It did not stand out as the people expected. the total budget of this movie was ₹220 crores (US$31 million). Thugs of Hindostan has grossed ₹335 crores ($51 million) at the worldwide box office.

A story about one man’s love for his nation and another’s love for power. An epic adventure filled with edge-of-the-seat thrills and war on the seas.

Bharat is a 2019 Indian Hindi-language drama film written and directed by Ali Abbas Zafar. The lead actor in this movie is Salman Khan who is a renowned actor in India and has contributed a lot to Bollywood. This movie is all about India’s post-independence history from the perspective of a common man and follows his life from the age of 8 to 70.

Bharat was theatrically released in India on 5 June 2019, on the occasion of Eid al-Fitr. It received mixed reviews from critics.

The film earned ₹42.30 crores on its first day, becoming Khan’s biggest opening day release. It emerged as a commercial success with a worldwide gross of ₹325.58 crores (US$46 million).

Do you know:- Most Viewed Indian Video in YouTube History

Baaghi 3 is a 2020 Indian Hindi-language action thriller film directed by Ahmed Khan. Produced by Nadiadwala Grandson Entertainment and Fox Star Studios, it is a spiritual sequel to Baaghi (2016) and Baaghi 2 (2018). In Baaghi 3 lead stars are Tiger Shroff, Riteish Deshmukh, and Shraddha Kapoor.

After the success of Baaghi and Baaghi 2, this movie launched this year. This movie is packed with actions and this movie is one of the most rated movies in Bollywood.

Baaghi 3 earned ₹17.50 crore net at the domestic box office on the opening day, which was the highest opening day collection for 2020 Bollywood film so far.

The film serves as a circumaural to the 2010 film Dabangg and 2012 film Dabangg 2 and is the third installment of the Dabangg film series. This movie is the second movie of Salman Khan in his list to reach 1 million-plus likes on Trailer.

Following the events of Dabangg 2 (2012), Chulbul Pandey has now become the SP of Tundla, Uttar Pradesh and is living a comfortable life with his family.

When he busts a human trafficking racket, he realizes he has locked horns with the kingpin Bali Singh who seems to be having a connection to his past. A flashback unfolds, showcasing the origin of Chulbul Pandey as a fearless cop and the reason behind his transformation.

Zero movies Produced on a budget of ₹200 crores (US$28 million), Zero movie is the Khan’s most expensive film.

Zero was released globally in Hindi on 21 December 2018. According to film trade analyst Taran Adarsh, it was shown on 4380 screens in India and 1585 overseas (noting that additional international territories will open later), for a worldwide total of 5965 screens.

Domestically, the film had the third-widest release of all Hindi films released in 2018, behind only Thugs of Hindostan (5000 screens) and Race 3 (4400 screens).

The story revolves around Bauua Singh (Shah Rukh Khan), a vertically challenged man, who is full of charm and wit, with a pinch of arrogance.

Born to a wealthy family and raised in an environment of affluence and indulgence, Bauua was never failed by Meerut or its people. But when he meets two women (Katrina Kaif, Anushka Sharma), his experiences with these women take him on a journey to complete his ‘incompleteness’ and broaden his horizons to find a purpose he never knew he had.

Kumar’s character was announced towards the end of Simmba that served as a character introduction of Sooryavanshi.

He is playing DCP Veer Sooryavanshi, the chief of the Anti-Terrorism Squad. Principal photography for the film began in May 2019 and was completed in November 2019. Initially scheduled for release on 24 March 2020, the film was indefinitely postponed due to the 2019–20 coronavirus pandemic.

Do you know:- Most Viewed Indian Songs in First 24 Hours on YouTube

Viswasam is a 2019 Indian Tamil-language action drama film written and directed by Siva.

The film stars Ajith Kumar and Nayanthara. Produced by Sathya Jyothi Films, the film was officially announced on 20 November 2017 and principal photography began in May 2018. The film was released on 10 January 2019.

Story of this movie:-

Thooku Durai is a charismatic village chieftain who settles disputes in his native strikes fear in the heart of his enemies. Disturbed by his involvement in feuds, Niranjana, his wife takes their daughter, Swetha and leaves him which changes his life.

One of the great movie Sarkar is a 2018 Indian Tamil-language political action film written and directed by AR Murugadoss, and produced by Kalanithi Maran under the banner of Sun Pictures.

This is the highest-grossing south Indian film of 2018, overtaking Bollywood and Telugu hits like Gold, Raazi, and Rangasthalam.

This movie collected US$1 million at the U. S. box office after Theri and Mersal.

Sundar Ramaswamy is a highly successful non-resident Indian businessman based in the United States. He arrives in Chennai to cast his vote in the Tamil Nadu Legislative Assembly election.

However, he finds out that someone else had already voted in his name. When he decides to investigate the matter, he finds himself pitted against two corrupt politicians.

Bigil is a 2019 Indian Tamil-language sports action film written and directed by Atlee Kumar and produced by Kalpathi S. Aghoram under the banner AGS Entertainment.

The film stars Vijay in dual lead roles as father and son alongside Nayanthara, Jackie Shroff, and Kathir in other prominent roles. The film has music composed by A. R. Rahman. The film’s title, Bigil was announced on 22 June 2019.

Business Today stated that Bigil has collected a total of ₹300 crores worldwide. The film’s Tamil Nadu theatrical distribution rights were sold at ₹80 crores and it has grossed ₹143 crores in Tamil Nadu after four weeks. In three weeks, the film had collected ₹13 crore from Chennai alone.

Bigil collected US$1 million at U.S box office, Vijay’s fourth film to do so.

This movie revolves around how a football player sacrifices his dream for his father, who is a gangster and who also wants his son to achieve big in football. Later, he gets a second chance to achieve his dream where he needs to coach a women’s football team to glory with many obstacles.

Ladies and gentlemen, these were the 9 movies which had crossed 1million likes in minimum time. I hope you have an idea about the Fastest Indian Movies Teaser/ Trailer to reach 1Million likes on YouTube. Right?

If you have any queries or wanted to ask something. Then feel free to contact us. You can either fill the form or directly you can email me. You’ll get the email in the footer section.

I’ll be back with more articles soon. Take care:)