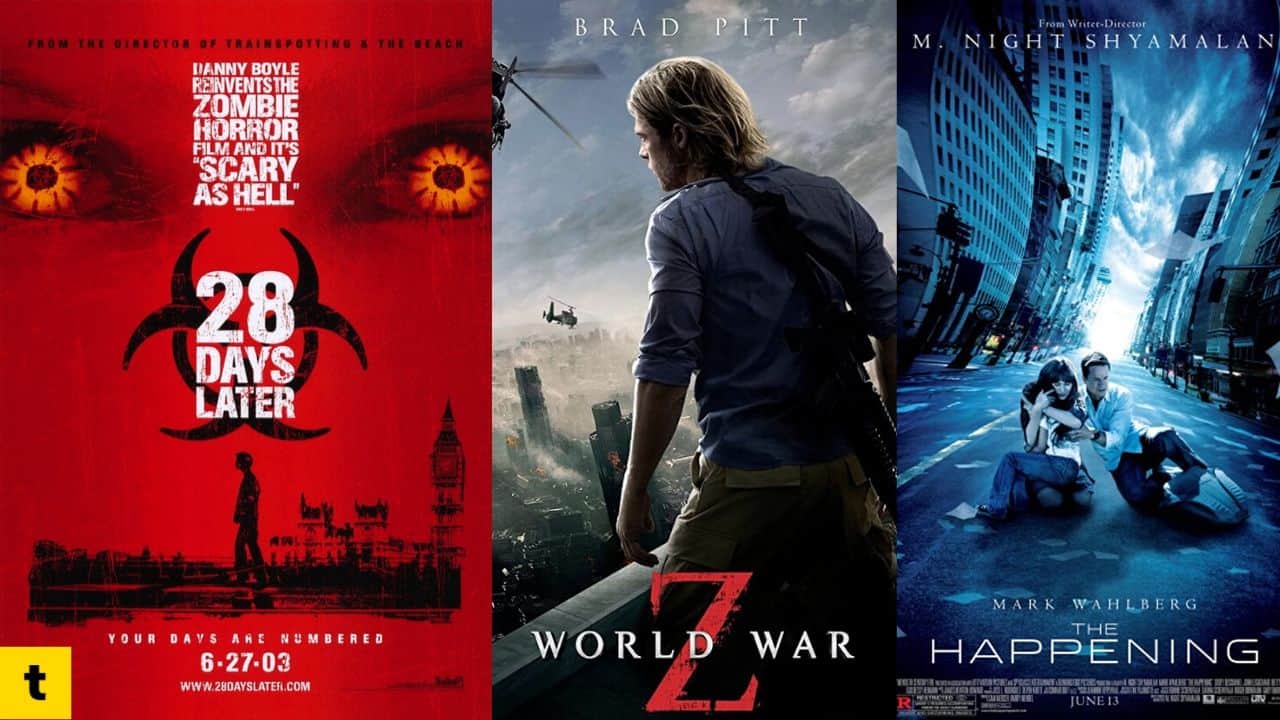 We would not even have ever thought of the situation in which we are right now. Due to the spread of infection and viruses, many countries are lockdown. people are losing jobs, the economy is gradually crumbling.

Because of the deadly COVID-19 most of the countries locked up at home and truly obsessed by this pandemic that’s taking over the globe, it only makes sense that some of the extra free time we now all have on our hands. So, why not watch a pandemic or virus outbreak movie?

Let’s find out some of the Best Pandemic And Virus Outbreak Movies. Let’s roll the list.

There are 6 parts of the Resident evil so far. All the parts of Resident Evil based on a virus outbreak. But, I would like to mention about Resident Evil: The Final Chapter here.

Resident Evil is Action, Horror, Sci-Fi movie which was released in 2016. If we talk about the storyline of these movies then Picking up immediately after the events in Resident Evil: Retribution, Alice (Milla Jovovich) is the only survivor of what was meant to be humanity’s final stand against the undead.

Now, she must return to where the nightmare began – The Hive in Raccoon City, where the Umbrella Corporation is gathering its forces for a final strike against the only remaining survivors of the apocalypse.

The Happening is a  Drama, Mystery, Sci-Fi which was released in 2008. In this movie, Elliot Moore is a high school science teacher who quizzes his class one day about an article in the New York Times. It’s about the sudden, mysterious disappearance of bees.

Yet again Nature is doing something inexplicable, and whatever science has to say about it will be, in the end, only a theory. Scientists will bring out more theories, but no explanations, when a more urgent dilemma hits the planet. It begins in Central Park.

Suddenly and inexplicably, the behavior of everyone in the park changes in a most bizarre and horrible way. Soon, the strange behavior spreads throughout the city and beyond. Elliot, his wife, Alma, and Jess, the young daughter of a friend, will only have theories to guide them where to run and where to hide. But theories may not be enough.

28 days later is a Drama, Horror, Sci-Fi movie. This sort-of zombie movie is somewhat of a cult classic. It’s gained a few sequels over the years, none of them noteworthy, but the original still holds his own after all these years. In this movie, Animal activists invade a laboratory with the intention of releasing chimpanzees that are undergoing experimentation, infected by a virus -a virus that causes rage.

The naive activists ignore the pleas of a scientist to keep the cages locked, with disastrous results. Twenty-eight days later, our protagonist, Jim, wakes up from a coma, alone, in an abandoned hospital.

He begins to seek out anyone else to find London is deserted, apparently without a living soul. After finding a church, which had become inhabited by zombie-like humans intent on his demise, he runs for his life.

Selena and Mark rescue him from the horde and bring him up to date on the mass carnage and horror as all of London tore itself apart. This is a tale of survival and ultimately, heroics, with a nice subtext about mankind’s savage nature.

[REC] is a  Horror, Mystery, Thriller movie which was released in 2007. In this movie, This Spanish movie tells the story of people being trapped in an apartment building as it gets hermetically sealed because of a virus outbreak. Surely nothing bad will happen! There’s been a freakish amount of sequels to this movie, but don’t watch those. They go down in quality really fast.

“REC” turns on a young TV reporter and her cameraman who cover the night shift at the local fire station. Receiving a call from an old lady trapped in her house, they reach her building to hear horrifying screams — which begin a long nightmare and a uniquely dramatic TV report.

It is a Mystery, Sci-Fi, Thriller movie which was released in 1995. In this movie, In a future world devastated by disease, a convict is sent back in time to gather information about the man-made virus that wiped out most of the human population on the planet.

If you’re into biological warfare and time travel movies, 12 Monkeys is one of the best movies you can find. After a man-made virus wipes out pretty much all of the Earth’s population, they send Bruce Willis back in time to prevent the virus from ever being released.

It is an Adventure, Drama, Sci-Fi movie which was released in 2007. If we talk about the story of this movie then, Years after a plague kills most of humanity and transforms the rest into monsters, the sole survivor in New York City struggles valiantly to find a cure in this post-apocalyptic action thriller.

2.) Rise of the Planet of the Apes

This movie was launched in 2011, it is  Action, Drama, Sci-Fi movie. At the story’s heart is Caesar (Andy Serkis), a chimpanzee who gains human-like intelligence and emotions from an experimental drug.

Raised like a child by the drug’s creator, Will Rodman (James Franco) and a primatologist Caroline Aranha (Freida Pinto), Caesar ultimately finds himself taken from the humans he loves and imprisoned in an ape sanctuary in San Bruno.

Seeking justice for his fellow inmates, Caesar gives the fellow apes the same drug that he inherited. He then assembles a simian army and escapes the sanctuary – putting man and ape on a collision course that could change the planet forever.

After watching this movie, you will feel that Viruses don’t always have to do bad things – sometimes they just make apes smarter. And considering how humans seem to get dumber and dumber, it only makes sense that they’d surpass us ridiculously fast and take over our planet.

This movie based on Action, Adventure, Horror. This movie was released in 2013. This one is a great example of a virus outbreak. In this movie, Life for former United Nations investigator Gerry Lane and his family seems content.

Suddenly, the world is plagued by a mysterious infection turning whole human populations into rampaging mindless zombies. After barely escaping the chaos, Lane is persuaded to go on a mission to investigate this disease. What follows is a perilous trek around the world where Lane must brave horrific dangers and long odds to find answers before human civilization falls.